7th day, Everybody Welcome, report of the day

During the 7th day the whole group was focused on testing the activities we have prepared during the previous day. The activities varied, but mainly revolved around the topics, such as Islamophobia, migration, hate speech, etc.

The day started with the forum theatre about hate speech. The participants had a chance to try out how they would react if they would face hate speech. “During the simulation we have mainly focused on the aggressor, but the discussion with him led nowhere,” said Leila, one of the participants from France during the debriefing, “I think, it would be more productive to approach the victim of the violence, as it is he, who was attacked,” she concluded. 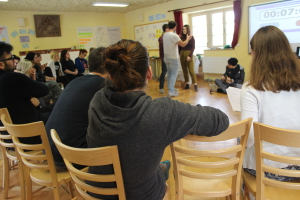 Afterwards, the group continued with the simulation of the situation at the borders. “It was a powerful tool to realize the complexity of the situation,” said Ester from Hungary, “it was very emotional for me to be in the skin of the refugees trying to cross the borders.” 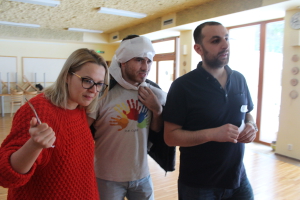 In the afternoon, we continued with talking about the Islamophobia and address some basic misunderstanding and false information about the Islam. The group prepared the quiz concerning various topics connected to Islam, such as women rights in Islam, refugees, or Islam in the media. The participants had a chance to talk about more explosive topics, such as politics and terrorism. “It is important to note that the biggest group influenced by the terrorism are Muslims themselves,” said Arslan from Pakistan currently studying in Germany. 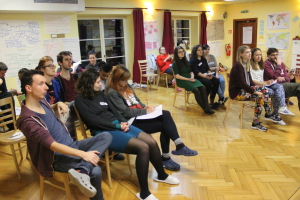 The last one was ours, the Community Building. We simulating a big meeting event in Brno with locals and foreigners. We had an introduction part where everybody revealed the new personality then a game which was about guessing the city then pointing it on the map blind-foldedly divided into two groups and a volunteer blind-folded. Then was the cooking part when we maked 3 types of dipping divided into 5 groups. The last activity was Activity with 2 groups: drawing, pantomime, talking. We could manage it dynamicly and funnily that was amazing. The whole day was succesful, meaningful, gave a lot of new information. 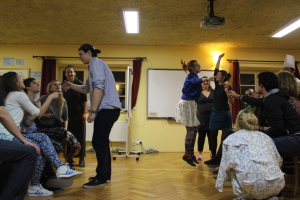