As students from the Czech Republic, participating in the Interaction of religions, we have visited many sites that had something to do with religion, or otherwise significantly contributed to our cultural horizons.
One of these monuments was the Basilica Cistern, Turkish Yerebatan Sarayi. Located near the temple of the highest wisdom Hagia Sophia (150m). It is a basilica, which served as a water reservoir which are usual around Istanbul, but this is the largest one (141 m long, 73 meters wide), it was built on an order of the Emperor Justinian in the event of war, in the period 527-565 AD 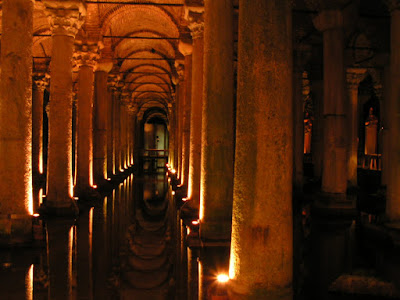 Entrance to the basilica is nothing significant in comparison with other monuments and looks very ordinary and dull.
The less it makes an impression of an entrance to the underground. After the walk around the cash register, you get to the stairs and after a few steps you´ll feel cold and moisture, after you descent to the very last step you’ll see something incredible, it opens you a look at the mystical place that is shrouded in mystery. Conservationists had partially flooded the basilica, the water level reaches a height of half meter and helps to complete the overall charm of this location. In the pure and clean water are swiming many different kinds of fish. On the bottom, we can see many “lucky” coins which the visitors throw there, in belief that waters would grant them their secret desires.
Since the basilica is located in the underground, the only source of light is amber bulb at the feet of each pillar, that gives the place an appropriate atmosphere. Water level, like a mirror, with lights create exceptionally unique look to it instead.
The ceiling support is the “forest” which means 336 columns with corinthian warheads, which are due to local moisture Emerald overgrown with alge, each of the columns is reaching up to 8 metres, where is supporting the vault. The Cistern has capacity of 80,000 cubic meters, the reservoir water was brought from Belgrade Forest, and that is located 19 km far.
In 1987, the Bazilic was renovated and about 200 tons of mud had been removed from there. In this work, there were two columns discovered, whose marble feet are standing on the large heads of Medusa, which can be seen in the northwest corner of the Bazilic.
When descending into the basement my curiosity grew and with mixed expectations, according to comments of people who have already visited the monument, it is a place which evokes in you a feeling of humility and wonder. At the entrance you are going to loose your breath. It´s just that amazing. You´ll sense ancient atmosphere of this wonderful place which is around you at every step in this breathtaking relic. The time here has absolutely stopped and left everything unharmed and unique. For me personally this was the most memorable experience of my whole journey to the Istanbul. I seriously doubt that i´ll ever forget this adventure.